The Saratoga Springs Ethics Board issued a unanimous decision dismissing a complaint made by Patricia Morrison against Finance Commissioner Michele Madigan as without merit. The complete decision is attached below.

Ms. Morrison’s complaint was complicated by the manner by which she made her complaint.

The procedure for making a complaint to the Ethics Board involves utilizing a form available on their site. The form requires that the complainant lay out the facts underlying their complaint and then identify the specific parts of the Ethics Code the  actions allegedly violate.

Instead of using the Ethics Board form Ms. Morrison wrote to Commissioner Madigan, the target of her complaint, and copied the Ethics Board. Her letter, which challenged Madigan directly, was meant to add drama to what she clearly hoped would be a news story.

The letter was dated June 14, 2019, just eleven days prior to the June 25 primary in which Democrats would decide between Morrison and Commissioner Madigan for the Democratic line for Finance Commissioner. Ms. Morrison had to know that any decision by the Ethics Board on her allegations would come after the Primary.

In her letter Ms. Morrison cites a fundraiser for Commissioner Madigan hosted by Matthew Jones who, as an attorney, represents Saratoga Hospital. A pending update of the city’s zoning ordinances to put them in compliance with the city’s Comprehensive Plan contains a change that would enable the hospital to expand. Ms. Morrison also notes that Mr. Jones had contributed to Commissioner Madigan’s campaign. Ms. Morrison asserts that the fact that Madigan allowed Jones to organize a fundraiser on her behalf and that Madigan accepted donations from Jones constituted “… a direct conflict of interest and can be viewed as a clear violation of the City’s Code of Ethics.”

People with even the most modest knowledge of our government will recognize how extreme and even bizarre this allegation is. Ms. Morrison’s letter is linked below for those who wish to confirm that this is what she alleged. However troubled many of us may be about money and politics, someone organizing a fundraiser on a candidate’s behalf or receiving a contribution within the limits of the law is not in violation of the City’s Ethics Code as the decision by the Ethics Board made crystal clear. I would note that Matthew Jones also donated money to Joanne Yepsen when the hospital had matters pending before the Council.

If accepting a campaign donation from someone who might have business before the City Council now or in the future was a violation of the City’s Ethics Code pretty much everyone who has run for office let alone been elected would be a serial ethics violator.

In fact, Ms. Morrison herself has received donations from the neighbors of the hospital who oppose its expansion.

In The Words Of Marshall McCluhan, “The medium is the message.”

The “beauty” of writing a letter to Commissioner Madigan and adding a tag to make it also a complaint to the Ethics Board instead of just submitting a complaint to the Ethics Board, is that it freed Ms. Morrison from the severe limits of having to keep the focus on specific alleged violations of the city’s ethics code and facts supporting the allegations. The medium of the letter to Madigan allowed Ms. Morrison to throw in all kinds of hot button charges.

In one example of how Ms. Morrison’s use of a letter as a vehicle for her ethics complaint allows her wander into other territory, she calls upon the City Council to “censure the Commissioner of Finance from any further deliberations relating to the hospital rezoning and project proposal.”  “Censure” means “to express severe disapproval of”. Aside from the fact there is no hospital project before the Council for them to deliberate on Ms. Morrison’s use of this malapropism does not give one confidence  in her linguistic abilities . Likewise after finally ending her letter by asking for the Ethics Board to make a “determination of fact” she “strongly recommends that advice and legal counsel pertaining to this issue should be sought from the New York State Joint Commission on Public Ethics.” This advice is presumably directed to the Ethics Board, but Ms. Morrison never explains why she believes the Board should seek this advice. Throwing this out there, though,  presumably adds a bit of gravitas to her complaint.

One has to acknowledge the cunning of this strategy, though, along with its effectiveness.

In their response to Ms.Morrison the Ethics Board addressed the issue of gifts to city officials. It pointed to the very clear language in the ethics code that elected officials, employees, and members of boards should not accept gifts. The one exception noted in section 13-2 of the code was campaign donations. As long as the amount of these donations are within the limits set by law they are not violations.

The Board wrote in their decision “that receipt of a campaign donation by a city elected official under the circumstances you describe does not constitute a violation of the gift provision in the Code.”

The language in the city’s ethics code is so clear that one has to ask how Ms. Morrison came to make her allegation. There are only three possibilities and none of them are flattering:
1. She did not take the time to read the city’s Ethics Code when making her accusation.
2. She read the ethics code and was unable to understand this very clear clause.
3. She knew what the Ethics Code said but also knew that the public would only find out the truth after the primary was over.
So What Does All This Mean?
The Finance Commissioner needs to be a person who approaches record keeping with a fastidious eye on detail and who rigorously studies and follows regulations and statutes. As a member of the City Council they need to approach issues at the table with restraint and prudence. Anyone who reviews Ms. Morrison’s behavior as reflected in both the substance and timing of her complaint must surely be deeply troubled by the prospect of her as the Commissioner of Finance. 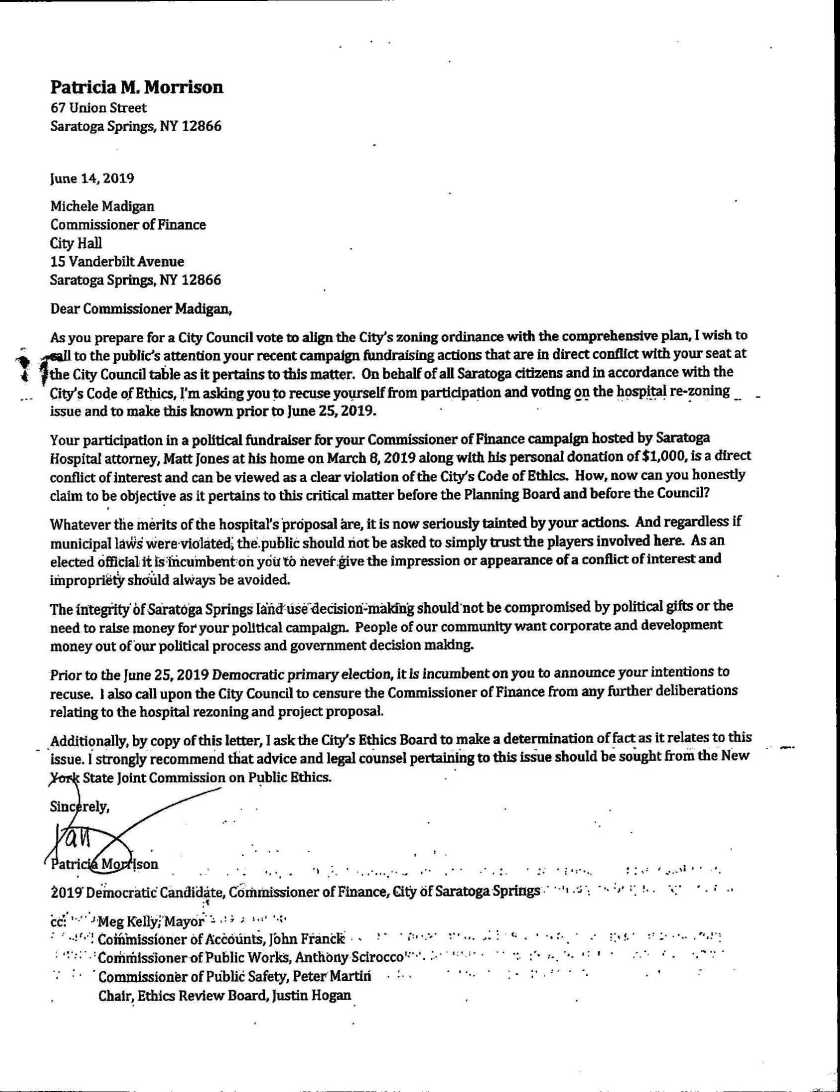 This is a link to the Ethics Board’s decision: ethicsresponse.20190808

10 thoughts on “City Ethics Board Rejects Morrison Allegations Against Madigan”