People who have followed this blog will remember the debacle of the city’s handling of the “conversion” of the “barn” [Some would say large shed] to a house on Murphy Lane in 2016. The real estate agent who bought the barn applied to the Zoning Board of Appeals for a host of variances stating in their application that they were going to save the barn and convert it to a home. To do this they needed variances for everything from set backs to required parking spaces as it would face a narrow alley. In violation of the assurances they put in their application for variances, they tore the existing structure down anyway. In a particularly controversial action the structure is much higher than the original. This was a poster child case for the abdication of responsibility by the Zoning Board of Appeals. The city halted construction, but due to gross mishandling by the ZBA, its staff person, Susan Barden, and the Building Inspector at the time, Steve Shaw, the city ended up in court and in the end had to allow the project to go forward. For details do a search on this site for Murphy Lane.

Recently, the property was listed for sale for a whopping $722,000, and among the specifications in the ad was that the property has two parking spaces. The seller successfully received a variance to allow for only one parking space. The allotted space off the ally barely accommodates one car. There is nowhere on the property for a second parking space. Here are some pictures of the property. Note how narrow the alley is if a car is parked in front of the house making it difficult for the neighbor with the red vehicle to get out of their driveway, and these pictures do not show how narrow the ally becomes when snow piles up. 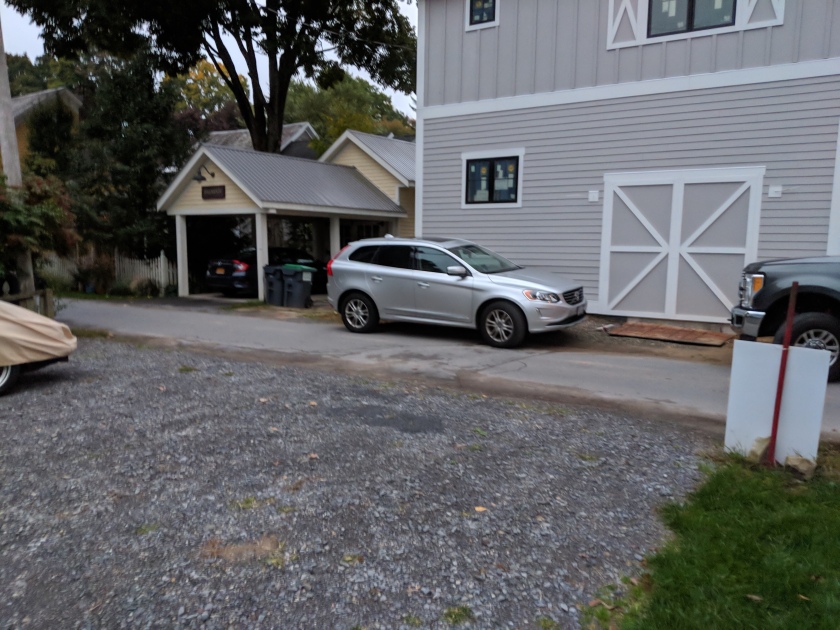 The Mayor’s office referred the complaint to Commissioner of Public Safety Peter Martin. The Public Safety office includes the office of code enforcement. I emailed Peter Martin on June 21 asking about the right of the owner to advertise the property as having two parking spaces and to lay stone in front of the property. I did not receive a response so on June 26 I wrote Commissioner Martin again asking if he would respond.

The Commissioner promptly responded to my second email with the following indicating that his department was going to put “No Parking” signs up:

John,
I have traveled Murphy Lane to look at the issues that you discuss and I have sent our police chief and fire battalion chief as well.  We will be posting fire lane – no parking signs on Murphy Lane. These signs are created by an outside firm and it can take several weeks to have them created.  The issue concerning compliance with building plans (height, etc.) should be reviewed by the city building department before issuing a Certificate of Occupancy.  We do not have enforcement powers with respect to the veracity of realtor advertisements.  Let me know if there is anything that I missed.
Regards,

The CO has already been issued so this still left the issue of the apparent misrepresentation regarding the parking spaces. I should allow that maybe I am missing something that explains all of this. I called a local realtor whose opinion I respect and asked what recourse there was about this kind of thing. He suggested that I contact the manager of the local realtor office that issued the listing.
I called that office and spoke to its manager. Understandably she appeared rather stunned and confused. She probably rarely hears from bloggers regarding her office’s listings. First she offered to connect me with the agent/seller. I declined. She then said she would look into it and get back to me.
I will advise the readers of this blog if and when she gets back to me.