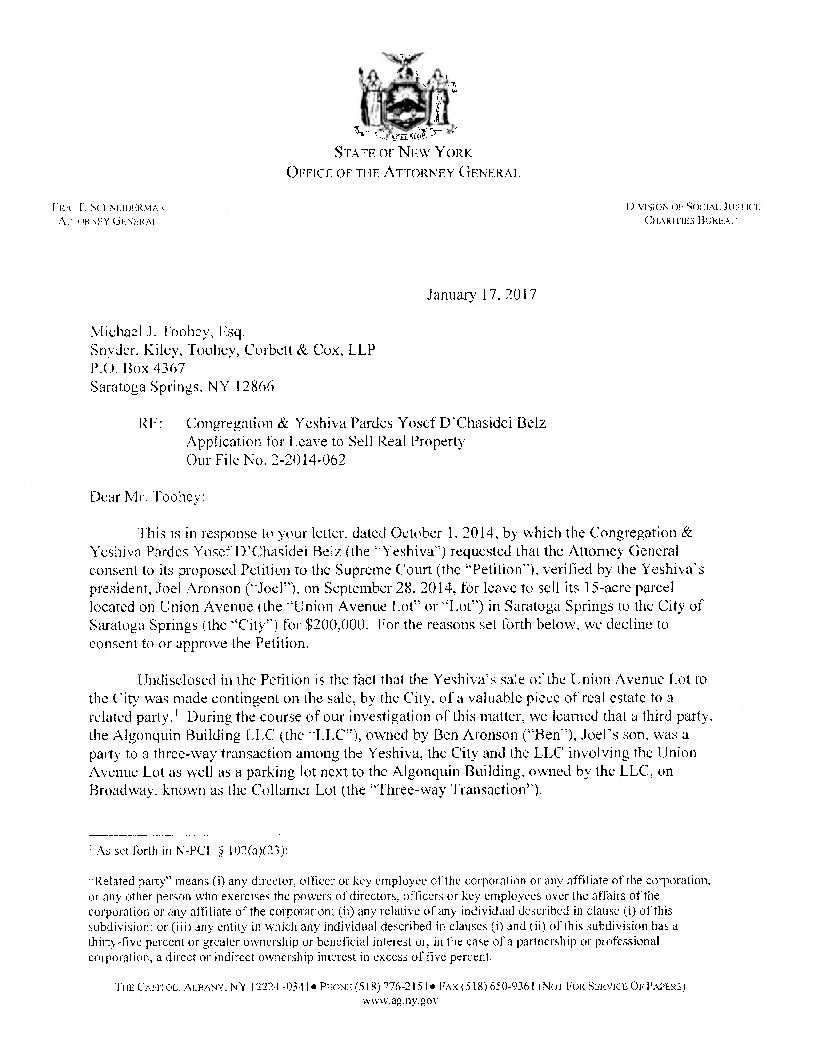 In 2014 the city entered into a complex transaction to purchase land out Union Avenue to provide emergency services to the eastern plateau.  The land is owned by the congregation of Yeshiva Pardes Yosef D’Chasidei Belz which is defined under New York law as a religious organization.  The transaction involved the city simultaneously selling the parking lot adjacent to the Algonquin Building, the Collamer parking lot, and acquiring the Union Avenue property.

In order for a religious institution to sell property, New York State law requires the approval of the Attorney General.

Attorney Michael Toohey represented Joel Aronson, the president of the congregation, in its petition to the Attorney General.

AAG Courtney wrote that “undisclosed in the petition is the fact that the Yeshiva’s sale of the Union Avenue lot to the city was made contingent on the sale, by the city, of a valuable piece of real estate to a related third party.  During the course of our investigation of this matter we learned that a third party, The Algonquin Building LLC (LLC), owned by Ben Aronson (“Ben”), Joel’s son, was a party to a three way transaction among the yeshiva, the city, and the LLC involving the Union Avenue lot, as well as the parking lot next to the Algonquin Building, owned by the LLC, on Broadway, known as the Collamer Lot (‘the three way transaction’). ”

As I read this, the Attorney General was troubled by the fact that the petition failed to divulge that the president of the congregation (the formal petitioner) was negotiating a deal that would benefit his son who would personally acquire a valuable piece of property if the deal went through.

As I read the letter, the sale must be based on benefiting the religious organization or its members.  It cites the following Federal code,

“[a]n organization is not organized or operated exclusively for one or more of the purposes specified in subdivision (i) of this subparagraph unless it serves a public rather than a private interest.  Thus to meet the requirements of this subdivision, it is necessary for an organization to establish that it is not organized or operated for the benefit of private interests such as designated individuals, the creator, or his family, shareholders of the corporation, or persons controlled directly or indirectly, by such private interests.”

Basically, it appears that Joel Aronson and the congregation was selling the property in a way that would benefit Mr. Aronson’s son and the Attorney General did not see how this sale fit into the religious mission of the congregation.

As noted by this opinion, denying this petition puts an end to the sale of the Union Avenue property for the proposed public safety building meant to provide emergency services.

At the time of the original agreement there was a very heated controversy with a variety of accusations about the legality of the city’s role and whether or not the deal made financial sense.  A local group led by among others, my friends Tom and Bill McTygue and Raymond Watkin, went to court to block the deal unsuccessfully.   I must say that in one of the early posts of this blog, I pointed out that the relationship between the Aronsons and their congregation seemed problematic and was the weakest link in this business.  Even a blind squirrel sometimes finds a nut.