Some time ago, Commissioner Mathiesen sent a proposal for comprehensive reform of the city’s ethics code to the Saratoga Springs Board of Ethics for their review and input.  Several days ago I visited the city’s website and found that after a three month hiatus (they last met in September), the Ethics Board had posted the agenda for a meeting to take place on Thursday, December 8th.  To their credit, after routinely violating the Open Meetings Law for months (possibly years) by failing to post notices of their meetings on the city’s website in a timely basis, they were finally in compliance.  On the other hand, their agenda was as uninformative as ever.  Here is the agenda: 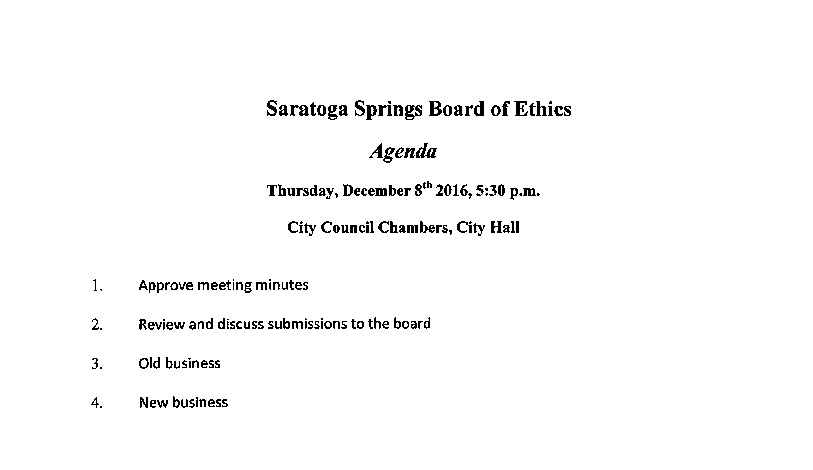 So I sent the following email to Justin Hogan, the chair of the Board:

I see that you have posted an agenda for a meeting of the Ethics Committee for December 8.  The agenda is rather vague.  Do you plan to take up the proposed changes in the city’s ethics code as sent by Commissioner Mathiesen to Tony Izzo?  If so, will the discussion of the proposed changes be held in executive session or open to the public?

Consistent with the history of this Board I heard nothing.

I contacted Commissioner Mathiesen who told me that Tony Izzo had advised him that  the proposed changes to the ethics code will be discussed at the Board’s meeting on December 8.  Whether they will discuss these changes in public remains to be seen.

For those interested in who Justin Hogan is they can use the search function on my blog.