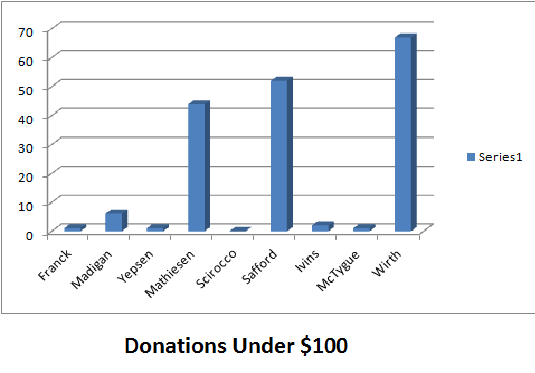 Joseph Levy and I have downloaded data from the New York State Board of Elections regarding the donors to the candidates running for Mayor and City Council in Saratoga Springs this year.  We chose to select for “all donations received from January 1, 2014 to present”.  As I understand it, the candidates are required to report quarterly on their donations.  The last filing date was October 1 so the data does not include donations for October which is a very important period for candidates and could include new donors not previously identified.

The data in the charts is for specifically identified donors.  The candidates also reported donations in a category called “Unitemized” which we are not listing.

In addition, the names that appear are sometimes organizations and other times individuals.  Joseph Levy and I have done searches on the web to find out who these people and groups are.  As careful as we have tried to be, our findings are subject to error.

Here are the latest totals for the candidates.

Linked to this blog are spreadsheets for each candidate with the complete listing of donors.  I have also written a program to cross reference the donors and candidates to see who has given to more than one candidate. For instance:

Here are some more of my findings from the cross referencing:

As would be expected, Mr. Safford is generously supported by the Republican network which includes the usual amalgam of business interests.  There was an obscure contributor identified as 422 Broadway LLC.  I emailed him asking who this entity was.  He never responded to my email.  The list was extensive.  I have identified some of the larger donors here and some others I thought of interest.

Ms. Yepsen was the champion fundraiser.  Many people contributed to her campaign.  With a few exceptions the list below is for people who donated $500.00 or more.  Attorneys were heavily represented in this group.  There were also several leaders of Saratoga PAC.

Ms. Madigan received more donations from donors who also gave to Republicans than any other candidate.  She was also the only candidate to receive a donation from Tom Newkirk of Saratoga National Golf Course.

The most interesting donation was $1,000.00 from Daniel Garrity who is the senior owner of Saratoga Raceway and Casino.  Bill and his brother Tom played a very public role in supporting the Racino’s bid for expansion.

Ken Ivins had very modest success in fundraising.  He did not receive the endorsement of the local Republican Committee.  It is interesting that the county committee donated money to him.

Skip Scirocco appears to have been modest in his fundraising.

No surprises here with the exception of the bizarre donation from Leon Pokoik .  The other donations are pretty much the standard network of real estate, construction, finance, and institutional Republicans with the exception of former Democratic Mayor Ray Watkin who is suing the city over the Collamer lot sale.

Commissioner Mathiesen received many small and medium donations.  He is supported by the most progressive wing of the Democrats in the town.  The only large donations he received were from Rob Mains ($900.00) and Amy Durland ($1,385.00).  They are married.  He did analytical work for the investment industry and she served on the Planning Board.  I will take the liberty of noting that Amy Durland has put in endless hours over the last few decades fighting the good fight to protect the greenbelt and to support thoughtful development.  I am not surprised by her generous support for Commissioner Mathiesen because Ms. Durland is someone who acts on what she believes.

John Franck is a staunch supporter of Saratoga National Golf Course and his donations reflect his enthusiasm for development.  It is interesting that he received all this money even though he has no opponent.  He did not report on any income during the quarter that ended October 1.

2 thoughts on “Donations To Candidates For City Council”