First, an admission.  My late mother was her club’s women’s golf champion for decades.  I did not get any of her golf genes.  For me to play this game would require fairways with containment  walls and very large holes in which to sink puts.  In spite of this, I hold no grudge against the sport.

As part of my research into Saratoga National Golf Course, I secured copies of the two easement documents that they executed in order to get approval for their course.  The agreements were with Saratoga P.L.A.N.

The agreements include maps showing what was agreed upon.   In particular, the documents show two “nature trails.”

In order to serve my readers, I decided to go out to the golf course and walk the trails.  My first problem was that I could not find either trail.  I drove to the parking lot at the clubhouse and using the easement agreement maps attempted to locate the trails.  My difficulties began with the fact that there is no obvious signage.  Exacerbating the problem was the fact that none of the tees have any identifiers telling you which one they are.  Speaking to a friendly father and son, I learned that the golf carts that players are required to use, have GPS systems in them that show you where your cart is and display the course including the tee numbers.

So after fruitlessly wandering around in the heat, I called Geoff Bourneman who told me he was pretty sure there was a parking area for a trail at the front gate.  So I drove back to the front gate and I noticed that slightly to the west there was an old gate and what appeared to be a small sandy parking area.  I drove over there and found a small sign and several small maps. 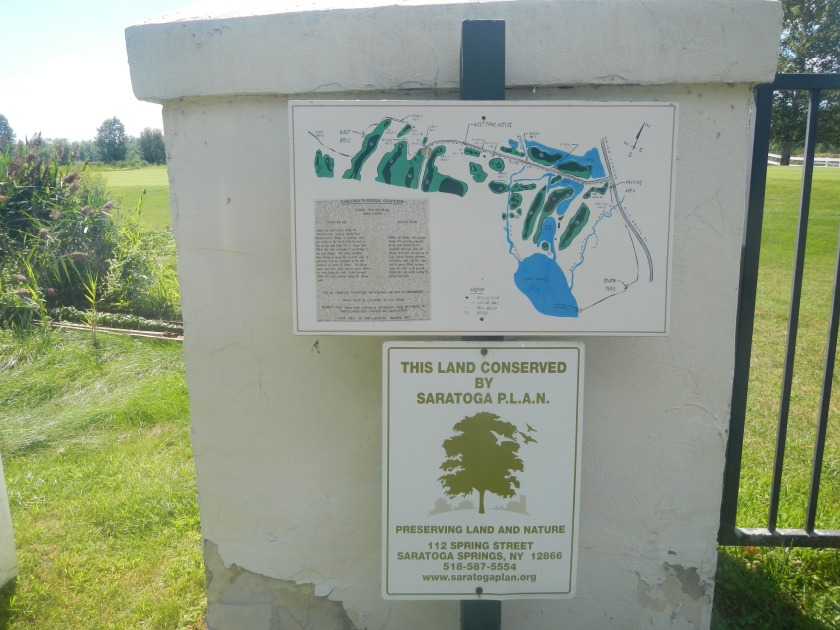 The maps showed two trails.  One trail led east to Lake Lonely.  I took this trail first.  This trail turned out to be quite lovely.  The first half was a bit noisy as it parallels Route 9P but eventually it veers away from the road and the noise.  There is a very nice bridge that goes over a stream and I watched a large snapping turtle with very impressive claws, leisurely swimming downstream.   The path is very well maintained by the golf course and is level and easy to walk.  It runs through the woods so that even though it was a very hot day, it was quite comfortable on the trail.  Eventually it ended at a very well maintained platform with benches overlooking Lake Lonely.  This is a very easy walk that can be done round trip in less than forty minutes. 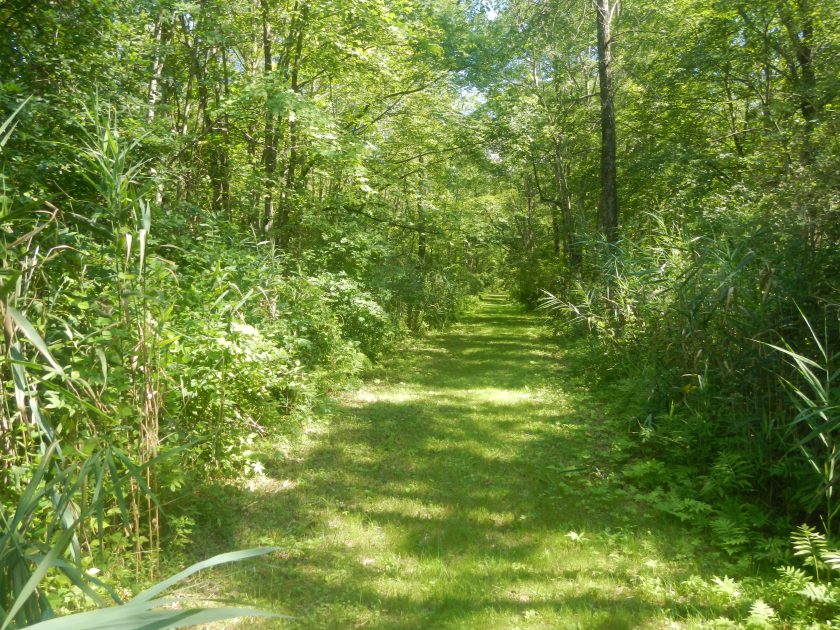 With this success under my belt, I attempted to find the other path.  I noted earlier that I did not get my mother’s golfing genes.  I did inherit my father’s lack of a sense of direction.  I made a mighty effort to determine where this trail was.  At the parking place there was a map and a set of directions which I am including with this post.  There were no pamphlets and I tried to use the easement map that I had printed out and annotate it with the directions and the map on the sign.  This turned out to be very confusing.   As best I could tell, I think that following the agreement that the easement was based on, someone decided to change the actual trail.  I tried to reach Maria Trabka, the PLAN executive director but she was not in.

This is the map of the west trail.  It is only marginally clearer in person then it is in this picture.

Here are the directions (For some reason the web software rotates this image):

I tried to get a map of the course from the clubhouse but they did not have any.  There is absolutely no signage.  As I noted, none of the tees or fairways are marked.   I think the instructions basically have you walking along the golf cart macadam from the gate on 9N to the other end of the golf course where an arrow on the map points to Yaddo.   This is made all the more confusing because the easement map calls it a “nature trail.”  Most of us do not think of a golf cart road as a nature trail.  Eventually, it became quite clear that I was never going to be sure I was on the right trail and I gave up.

When I returned to my office, I went on the P.L.A.N. web site and found that the site references the east trail (the lovely one) but there is no reference to the west trail (the mystery one).

Here is the map displaying the trails that was exhibit A in the easement agreement.  For those of you with exceptional eyes you will see that the map in the parking lot shows a different trail from the one in the easement:

The easement agreement seems to confirm the right of Saratoga National to change the trail at their discretion.   Here is the language.

“1. Grantor grants this easement over the paths depicted on the map of Saratoga National Golf Course preparted by L. Sipperly and Associates, dated April 27, 2001, which is attached hereto and made part hereof as Exhibit “A’, for use by the public as hiking trails;provided, however, that grantor reserves the right to alter the paths from the course depicted on the map (my emphasis added) marked as Exhibit “A” if grantor reasonably deems it necessary for use of its golf property.”

The agreement also seems to include a requirement for proper signage and restrooms.

“2. It is agreed between the parties to this instrument that the general public will enjoy the following rights in the hiking trails:

a. The right to use developed and marked hiking trails (my emphasis added) pursuant to rules and regulations established by grantor on days and during the hours that grantor’s golf course is open for use by the public…

b. The right for use of certain facilities provided by grantor, including a parking area and restroom facilities (my emphasis added), during hours that the trail is open.”

The following language further affirms Saratoga National Golf Course (Grantor) responsibilities to do a proper job of making sure the trails can be found and followed.

“3. Grantor has developed a hiking trail, built bridges and drainage facilities, will construct and post signs in a style consistent with the signage on grantor’s golf course property (my emphasis added), and established necessary maintenance facilities for the use of such trail, as the parties have heretofore agreed appropriate, and the hiking trail and related facilities shall be maintained by grantor in a manner that is satisfactory to their continued use by the public as a hiking trail.”

I assumed that P.L.A.N. was responsible for insuring that Saratoga National Golf Course adhered to this agreement.

I will be contacting Ms. Trabka next week to seek clarification on all of this.

It is important to note that this easement was critical for Saratoga National Golf Course to win approval to build its golf course.  SNGC may have enthusiastically embraced agreeing to the easement but it is clear that they had no choice if they wanted to move forward on the original project.

The relationship between P.L.A.N. and SNGC is a complicated one.  SNGC had donated $10,000.00 a year to P.L.A.N.  If SNGC gets approval to build their resort, they will need P.L.A. N. to be a party to their next easement.  I noted in the August 20, 2015 issue of Saratoga Today that P.L.A.N. will be putting on their big annual fundraiser at Saratoga National Golf Course.