I met with Angelo Calbone at his invitation to discuss the Saratoga Hospital’s plans to build an office facility and parking lot on land currently owned by D.A. Collins but under option to the hospital.

An earlier proposal by the hospital to expand was the source of considerable controversy several years ago with strong opposition from the neighbors in the area.

At present, the land the hospital wants to build on is undeveloped and quite charming.  While this land is subject to development now under current zoning, the hospital proposal would involve a much more intensive use of the land than is currently allowed and raises concerns about the impact it would have on traffic in the affected neighborhoods. 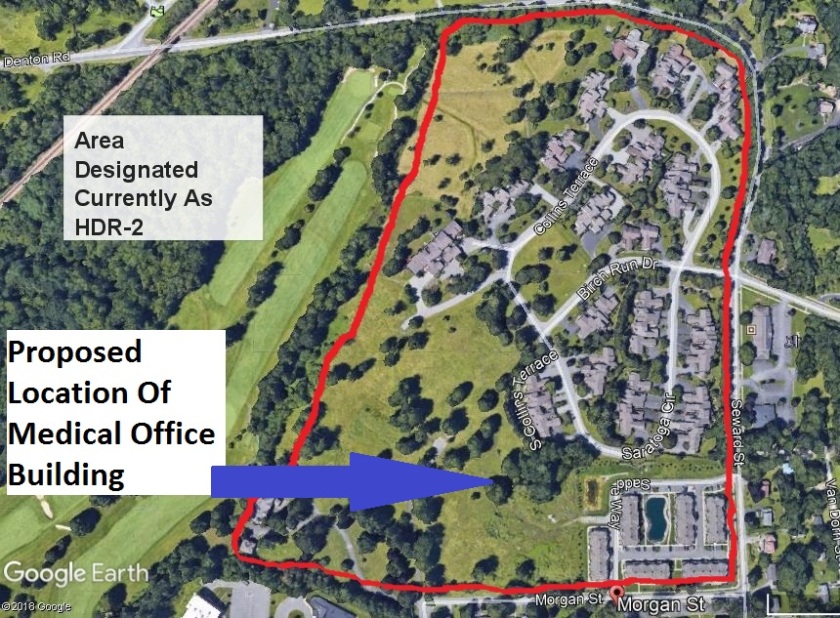 The Comp Plan that was in effect before the adoption of the current 2015 Comp Plan designated the area to the north of Morgan Street and the west of Seward Street (includes all Birch Run, the apartments on Morgan Street and the two vacant parcels the hospital intends to purchase from D.A. Collins – see map above) as HDR-2.  HDR-2 stands for High Density Residential which allows for 10-15 units/acre.  The condos at Birch Run and apartments in that area are examples of what is  allowed under HDR-2.  The two vacant parcels along Morgan Street where the hospital intends to build were never rezoned as called for in the pre-2015 Comp Plan. Arguably, the zoning for these two parcels was more or less compliant with the old comprehensive plan because the UR-1 zone (four units per acre) is less dense than the directive in the old comprehensive plan that called for zoning that would allow residential units with 10-15 units per acre.  In any case, that all changed with the adoption of the 2015 Comprehensive Plan that now designates this area to be INST which stands for Institutional.  This designation contemplates the re-zoning of this property  for, among other things, health related facilities like a medical office building. The Institutional designation does not contemplate zoning for single family or multi family units. The actual language from the Comprehensive Plan that describes the INST designation is “the Institutional designation includes areas that provide services such as religious, educational, health, cultural and tourism”.  The change in designation for these parcels came at the behest of Saratoga Hospital’s request of the Comprehensive Plan Committee in November 2014 when Hospital Vice President Kevin Ronayne described the hospital’s need for more medical office space in close proximity to the main hospital building. He urged the committee to re-designate this area in a manner that would accommodate zoning to allow for medical offices. The committee agreed and the Council ultimately adopted this designation as part of the overall Comprehensive Plan when it voted in June 2015.

In February 0f 2016 things got very messy when the city council addressed the actual rezoning.  Both Mayor Joanne Yepsen and Commissioner Franck recused themselves from voting on the rezoning asserting that they had conflicts of interest.  The vote to rezone required a super majority and without Yepsen’s and Franck’s participation a super majority was not possible.

Now with a different Mayor and a different Public Safety Commissioner, the zoning change vote is slated to come before the Council again, once the Council has reviewed the zoning map and comprehensive plan alignment recommendation, currently scheduled for March 12. This recommendation will presumably affect many city parcels, not just the land of interest to the hospital. If the zoning map is amended, the hospital will be able to make a site plan application to the Planning Board.

Mr. Calbone, Saratoga Hospital CEO, and I had a very thoughtful conversation which I found helpful in understanding better the hospital’s rationale for their proposal.

First of all I had thought that the proposed office facility was a kind of medical building simply providing space to interested doctors.  In fact, the medical offices that would be located there are offices of the hospital’s medical group, all employees of the hospital. It is beyond the range of this post to address the trend but essentially independent medical practices are becoming increasingly rare.  The full gamut of the medical profession from family practitioners to surgeons are opting to work directly for hospitals.  The hospital already has a very large employed medical group and given the national trends it is reasonable to expect the staffing of the hospital to continue to grow.

As explained to me by Mr. Calbone, the medical group’s offices are now scattered about the area in a variety of locations.  In order to be eligible for certain reimbursement streams, medical facilities in New York State must adhere to standards set under Article 28 of the New York State Public Health Law.  The process to certify these facilities is apparently extensive and rigorous.  Given that these facilities are meant to address health needs of a vulnerable  population, it is not surprising the requirements in areas such as safety, ventilation, and sanitation are extensive..

As explained by Mr. Calbone, the cost of retrofitting these off site offices to meet these standards is high as, I expect, is the cost of maintaining them.  My impression is that most of these facilities are leased.  He made a compelling argument as to the value of having a centralized medical facility in the city which would be owned by the hospital and designed specifically to meet these requirements

He also raised an oddity in the Medicare reimbursement formula.  For some reason, Medicare has a higher reimbursement rate for services provided at the hospital than at other offices.  Apparently their definition of what is “at a hospital” is that the operation must be within 250 yards of the main building.  He provided links to the Medicare regulations in support of this.  I will admit to the readers of this blog that I found the arcane nature of these links beyond my ability to decipher.  In correspondence from Mr. Calbone, he asserted that the savings would be in the order of $1.5 million dollars a year if the offices were situated adjacent to the hospital.  I am in no position to verify this number but it seems reasonable that whatever the figure is it would be significant given the magnitude of Medicare.  If there is someone out there that challenges Mr. Calbone on the Medicare regulations, I would welcome it but barring that I am willing to give Mr. Calbone the benefit of the doubt on this. A consistent theme in Mr. Calbone’s commentary is that increased revenue or money saved through any hospital initiative is money that can be redirected to patient care.

Mr. Calbone emphasized to me that the hospital is a not-for-profit institution.  The moneys saved by the success of the proposed facility do not go to share holders. They are invested in the improvement and expansion of patient care.

We also discussed the option of building the offices above the existing hospital structure.  He offered that the hospital will in the future expand space by building up but that he felt strongly that this future space needed to be reserved for anticipated patient care.  He noted that his own administrative offices are under consideration to be moved to provide additional space for patient care.

I asked him about the possibility of expanding the parking facility at the hospital.  The following was his description of the problems with this option.

A combined parking garage/office building structure on the hill

Regarding your question about a combined parking garage/office building structure, as reference, I’ve included below the excerpts from the letter we sent to our neighbors.

To specifically address the idea of a combined parking garage/office building structure, there are additional constraints and considerations we have explored:

From the letter [JK: A letter sent to the hospitals neighbors]

…If the hospital does not move forward with this project on this parcel of land, we may revisit the concept of building adjacent to the hospital’s main campus, on the hill on the west side of Myrtle Street where our current employee and visitor parking is located. If this concept were to move forward, we would still be bringing staff and patients to the main campus. If another developer purchases the land at the top of Myrtle Street and expands the neighborhood, that will increase traffic and compound the traffic concerns.

Building “on the hill” was fully explored and determined to be the less viable solution on many levels. Building on the hill would require constructing an 800-space, multilevel parking garage to accommodate the employee and visitor parking displaced by the new office building and parking garage, as well as for the additional parking needed for the new building.

In this scenario, all of the current parking demands would be dispersed throughout the surrounding neighborhood for upwards of two years during construction. This redistributed parking would account for hospital staffing and shift changes, 24 hours a day, seven days a week.

Constructing a parking garage is estimated at $10 million dollars above the cost of the office building. We believe that would be an irresponsible use of the community’s resources, money that should be directed to patient care and patient safety….

The major vexing issue remains how to address the increased traffic that would result from the Hospital’s expansion.  To his credit, Mr. Calbone did not try to minimize the traffic concerns nor did he offer glib solutions.  In the end, if this project goes forward, finding a solution will rest with the cooperation between the city and the hospital.  During the last few years the makeup of the city’s Planning Board has improved in terms of its independence in critically assessing projects.  I have great respect for Mark Torpey, its chair.  The citizens of this city will have to rely upon the Planning Board to protect the neighborhoods affected by this project by insisting on a workable traffic plan.

Assessing this project has not been easy for me.  I have friends who live in the affected neighborhood who adamantly oppose the hospital’s plans.  It is a beautiful piece of undeveloped land and in the best of all possible worlds I would greatly prefer that the city bought it and turned it into a park.  The reality is that this is not going to happen.

During my conversation with Mr. Calbone I noticed aerial photos on the walls of his office that serve as a documentary history of Saratoga Hospital.  Similar to many other hospitals, it has experienced enormous physical expansion over the years.  The fact is that if I were Mr. Calbone thinking strategically, I would be coveting the D.A. Collins land as probably the last major property to use for future growth.  If this land were sold and developed as residential property, the cost for acquiring it from multiple homeowners in the future would probably be both financially and logistically problematic.  I can only assume that this is probably an important element in his pursuit of his project.

The Medicare website periodically issues a report card evaluating the nation’s hospitals.  They recently issued a report that showed a decline in the ratings for New York hospitals.  Disturbingly, New York State’s hospitals rated 50th out of 50.  Bucking that trend has been Saratoga Hospital [https://www.medicare.gov/hospitalcompare/results.html#dist=50&loc=12866&lat=43.0964412&lng=-73.7242486].  Saratoga Hospital increased its rating from a 3 to a 4 (ratings range from 1 to 5).

This is a story that was published in the Glens Falls Post Star Newspaper in its March 3rd edition.  It is headlined “Glens Falls Hospital CEO Describes Dire Financial Situation To Local Leaders.”  It is a sobering story and it reinforces the poverty of what passes for our health care “system” and how critical the role money plays in the survival of our most essential institutions.

11 thoughts on “A Conversation With Hospital CEO, Angelo Calbone, Re the Controversial Plans For A Medical Office Building”