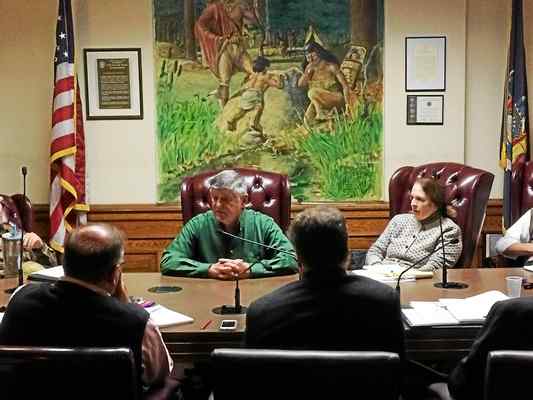 SARATOGA SPRINGS >> The charter review commission has been conducting their review of the city charter for the past month, interviewing past and current elected officials. However, on Tuesday night the commission interviewed only a former Commissioner of Public Works, Tom McTygue, as the current commissioner Anthony “Skip” Scirocco did not show.

Scirocco skipped testifying in front of the charter review commission because of what he perceived as a political play. Scirocco was under the assumption that commission chairperson Bob Turner had invited former Director of Public Works, and a former political opponent to Scirocco, Bill McTygue to testify at the meeting along with his brother Tom and Scirocco.

Scirocco, feeling uncomfortable at the prospect of being caught between the McTygues, as they “regularly make baseless claims against” his department, sent Turner numerous emails from September 23 to Tuesday looking for clarification on whether McTygue would be testifying at the table. Turner did not reply until a half hour before the meeting was to begin.

“I gave him every opportunity to respond back to me and he was clearly negligent,” Scirocco said. “I clearly objected to it and I think I had every right to object to it, because no other commissioner or mayor has sat there with [an unelected] political opponent.”

The initial email that Turner sent Scirocco indicated that Tom McTygue had asked if Bill could be at the meeting because “his memory is better.” Turner offered that Scirocco could bring his deputy and that he would “not allow it to become a political free for all of them criticizing you [Scirocco].” It was never clearly indicated whether McTygue would be sitting in the audience or if he would actually be testifying to the commission. To Scirocco, however, it was loud and clear.

As the only Republican on City Council, Scirocco felt that the commission was being bias for Democrats by inviting Bill McTygue to testify when he had never been an elected official. In a final email Scirocco sent to Turner on Tuesday, Scirocco said “no Democrat has been made to participate with former non-elected political opponents, and as the sole Republican I strongly object to this mistreatment. You are clearly treating me differently than everyone else.”

Turner said that this was miscommunication and that McTygue was never invited to testify.

“Our plan is to speak to every elected official in Saratoga Springs history,” he said, indicating that there was no political bias.

“We’ve had a number of political opponents in the past and what we’ve tried to do is not make it about the politics,” he continued. “It’s about the structure of government and how we can make that better. That’s far more important than the politics or the personalities.”

At Tuesday’s meeting, Bill McTygue did not testify, but was present at the meeting in the audience. Turner said that this had nothing to do with Scirocco’s email and Bill was never going to testify at the meeting.

Scirocco will be invited to testify before the charter review commission at a later date, possibly October 25, when officials who have not been interviewed will have their say.

The next meeting will be a public hearing on October 11 at the Tang Teaching Museum at Skidmore College, where the public will be able to voice their questions or comments regarding the city charter.