Based on her resume, the new SPAC director looks very promising. 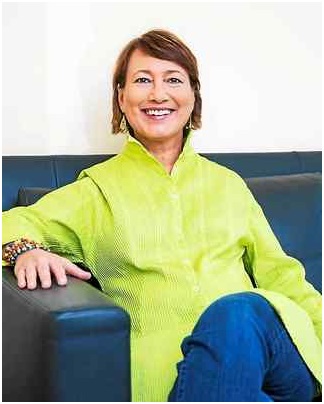 Elizabeth Sobol, who will become the new president and CEO of Saratoga Performing Arts Center on Oct. 1. Photo provided

SARATOGA SPRINGS >> Saratoga Performing Arts Center has chosen its new leader to bring the organization into its next chapter.

Elizabeth Sobol was announced this week as the new president and CEO of SPAC, to follow outgoing chief Marcia White.

Formerly the president and CEO of Universal Music Classics and managing director of IMG Artists in North/South America, Sobol brings to the position decades of artist management and recording industry experience in both the classic arts and mainstream entertainment along with a commitment to breaking down barriers between the two.

Her position at the venue, which is currently celebrating its 50th anniversary year, will begin on Oct. 1.

SPAC recruiters chose Sobol in hopes she will bring diverse experiences and a determination to bring great music and dance in all its guises to SPAC audiences.

“We are excited to welcome Elizabeth Sobol as SPAC’s next president and CEO,” said Susan Phillips Read, chairman of SPAC’s Board of Directors, in a press release. “Elizabeth is a seasoned executive whose artistic and musical interests and experience range from straightforward classical to pop, jazz, world music and dance. All of this makes her an ideal fit for SPAC, with its eclectic mix of programming. As SPAC concludes its 50th anniversary season, the board was struck by Elizabeth’s imagination and vision for expanding SPAC’s future reach and audiences.”

Sobol said in the release she is delighted to join the Saratoga Performing Arts Center, which she called “a vital artistic institution that is clearly cherished by its enthusiastic and curious audiences.” Sobol noted many artists she has worked with over the years have enjoyed performing on the SPAC stage.

“I am looking forward to deepening SPAC’s artistic partnerships with the Philadelphia Orchestra, New York City Ballet, Chamber Music Society of Lincoln Center and Live Nation to curate SPAC’s signature blend of programming,” Sobol continued. “I have really fallen in love with the culture and ethos that is in abundance in Saratoga Springs and look forward to being a part of and contributing to this community.”

Before coming to SPAC, Sobol most recently served as president and CEO of Universal Music Classics (UMC) where she successfully ran the American home for the prestigious Decca, Deutsche Grammophon, Mercury Classics and ECM imprints, along with the revitalized UMC label, which Sobol oversaw from Universal’s New York headquarters. Sobol’s vision for the label included a commitment to the best that “classics” stands for: music rooted in the classical tradition, while also encompassing a variety of genres including contemporary, jazz, and world and a focus on US-based artists and repertoire that represented diverse genres.

As managing director of IMG Artists North/South America (IMGA), Sobol was widely considered one of the most well-respected and creative artist managers in the business, overseeing many popular artists, the press release said. Sobol created the IMG Artists Dance Division, and also created and oversaw IMGA’s initiatives and growth in the areas of world music, jazz, contemporary music and music/dance theatricals.

During Sobol’s nearly three-decade tenure at IMG Artists, she nurtured the careers of some of the music world’s most respected artists including violinist Joshua Bell.

“I have worked with Elizabeth Sobol in many capacities over the past thirty years and believe she is one of the true gems in our industry,” Bell said in the release. “She has a tremendous ear for great music, matched by a heart filled with passion and a commitment to bringing out the best in every artist she works with and project she touches. I have no doubt she will bring that enthusiasm and commitment to SPAC.”

From 2006 to 2012, Sobol was programmer and producer of the Festival of the Arts BOCA, which included many of IMGA’s premier clients, as well as cultural figures such as Salman Rushdie, Edward Albee, David Brooks and Doris Kearns Goodwin. In the recording sphere, Sobol has been executive producer of numerous albums, three of which have garnered Grammy nominations.

Sobol studied at Sarah Lawrence College and the Rotterdam Conservatory. She received her Bachelor of Music in Piano Performance from the North Carolina School of the Arts.

White, who will soon end her leadership role at SPAC, added “As SPAC’s 50th Anniversary Celebration comes to a close, I am thrilled to pass the baton to Elizabeth Sobol. Her proven record as an arts manager and her passion for the arts are testaments to the leadership and inspiration that she will bring to our exceptional venue. I wish her great success and will be cheering her on in the years to come.”