[Subsequent to this article Mayor Yepsen told the neighbors the city was standing firm behind Steve Shaw, the building inspector]

The barn at 39 Murphy Lane as it looks presently, under total reconstruction. Photo provided 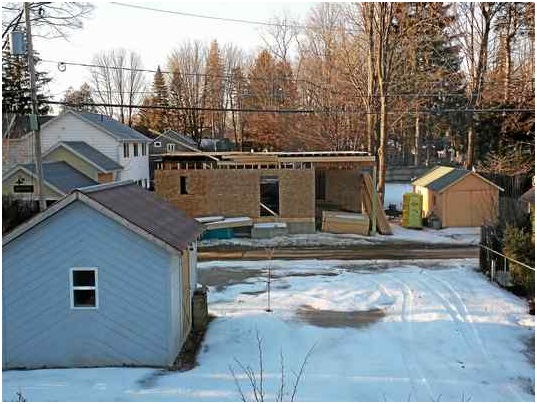 By Jennie Grey, The Saratogian

The barn at 39 Murphy Lane as it looked in the beginning.

SARATOGA SPRINGS >> The 100-year-old barn at 39 Murphy Lane took another unexpected turn in its renovation journey when the applicant recently withdrew her request for area variance modifications, positing that a 2015 variance gave her all authority to proceed with the scope of the project.

The afternoon of April 11, the zoning board of appeals (ZBA) received a letter from James Fauci, the Ballston Spa attorney representing barn owner and applicant Jean D’Agostino. The letter was addressed to ZBA chair Bill Moore and to Mayor Joanne Yepsen as well. The barn project had been scheduled to appear under old business at that evening’s ZBA meeting; however, the lawyer’s letter withdrew the application altogether, according to Assistant City Attorney Tony Izzo, who read from it at the start of the meeting.

“The applicant is withdrawing her variance request, saying the ZBA’s previously granted variance from March 23, 2015 provides her with all authority to proceed with the renovation,” Izzo said. “She also requests that the building inspector withdraw the stop-work order placed on the project.”

D’Agostino’s original proposal was to renovate the barn situated on a one-third-size lot on Murphy Lane, an alley that runs parallel between Lincoln Avenue and White Street on the East Side. The project was presented as a renovation of an existing barn/carriage house into a single-family residence. The zoning board originally granted seven area variances for the work, which began under Engineering America Co. engineer Tonya Yasenchak.

“The plan was to return this 100-year-old barn to its original glory,” said Brian Rodems of White St. during public comment at the March 21 zoning board of appeals meeting. “But after being granted the variances, the owner tore down the barn. The building going up bears no resemblance to the old one.”

Rodems is one of a group of neighbors near Murphy Lane protesting that the work done on the project oversteps its bounds. Essentially, none of the old barn remains — it has been methodically deconstructed and replaced with new materials during the past few months, residents say. The entire roof of the barn has been removed, and it now sits in a state of arrested development due to building inspection.

When city Building Inspector Steve Shaw recently checked out the site, he found that more work had been done than had been approved. He requested a new foundation plan, but said he had not yet received one. Even without that plan, however, he could see the deviation from the originally approved design.

“The plans said the builders would keep the core of the barn as much as possible,” he said. “But the preexisting nonconforming status of the building was being increased.”

He issued a stop-work order.

At the previous ZBA meeting in March, Vice Chair Keith Kaplan had proposed a compromise: asking D’Agostino to modify some of the building’s dimensions and to use Design Review Commission (DRC) approved materials on the exterior. Most of the members agreed to ask the DRC for an advisory opinion on dimensions and materials.

However, Fauci pointed out in his letter that the DRC has no authority over this project, as the subject premises do not fall within the DRC jurisdiction. Notwithstanding, he said D’Agostino has shown herself willing to submit to the ZBA and DRC reviews.

“This further points to her good faith and willingness to work with the city,” he wrote.

Meanwhile, Rodems has also written to the mayor and the city attorneys, addressing both the barn project and the larger issue of how the ZBA operates.

“We are faced with the continued threat of overdevelopment or poorly planned development that will have a deleterious impact on our quality of life and the value of our property,” he wrote. “It would appear that the members of the ZBA have a predilection to provide support for developers — at the expense of neighborhoods — by loosely ‘interpreting’ the zoning code to favor developers.”

After reading parts of the lawyer’s letter aloud, Izzo said to the board, “There are factual as well as legal issues here. The building inspector may have a great deal to say.”

One thought on “Jenny Grey On Murphy Lane Developments”