The struggle to protect our city is an endless challenge.  The Unified Development Ordinance is shaping up to be yet another opportunity for the real estate industry/Chamber of Commerce to try to take another bite of the apple.

The original contract  with Behan Planning and Design to write the UDO(see document below) was at least a reasonable plan for allowing the public to carefully scrutinize the process. It appears, though,  that the Mayor who is identified as the “project manager”, has simply ignored the key elements of this contract.  Instead of an advisory committee receiving regular reports from the consultants and these reports being made available to the public there has been virtual silence for almost five months.  Deliverable dates promised by the consultant have been ignored.  One hopes that other members of our City Council will ask the clearly needed questions about why the contract has not been adhered to.

In the meantime, the consultants have announced an event for public input that appears to be designed for the attorneys and developers rather than the public.  The all day and evening event is scheduled for a weekday which for people outside the real estate industry is a problem in and of itself.  As described in the press release, “The purpose of this community workshop is to collect additional public input and suggestions on potential changes to the city’s Zoning Ordinance, Subdivision Regulations and related development codes…”   I follow this stuff fairly closely and I am overwhelmed by this charge.  What I could have dealt with is materials outlining what changes from the existing codes are being contemplated.  If the reports promised in the original contract had been regularly posted, I along with many others, could have weighed in on whether the contemplated changes were good ideas.

Concerned over the apparent abrogation of the contract with the consultants, the lack of ongoing transparency, and the poorly designed meeting to get community input, I have emailed the Mayor and the City Council asking that they clarify the status of the contract.

In addition to the email to the Council I am including the press release for the upcoming workshop and the section of the contract identifying what was originally agreed to.

A Workshop Designed For Lawyers and Developers

I have received the press release regarding the public UDO workshops on February 4 planned by Behan Planning and Design. I was struck by the following from the invitation. “The purpose of this community workshop is to collect additional public input and suggestions on potential changes to the city’s Zoning Ordinance, Subdivision Regulations and related development codes.” I have serious reservations about how effectively the average citizen (as compared to attorneys and developers) can participate in this. Selecting a weekday for this event adds to the feeling that these workshops are more directed to the real estate industry than to the general public

How Can A Contract With A Consulting Firm Be So Completely Ignored?

I have reviewed the contract between the City and Behan Associates which the city agreed to last August. I have also reviewed the UDO website that laid out the tasks and timelines for the project. I am quite concerned that the deliverables in the contract for this project, according to the available records, seem to have been either grossly delayed or abandoned.

The contract also stipulates that an “advisory committee” made up of representatives of the City’s Departments along with representatives from City Boards was to be established. The contract further states that the consultants “will provide ‘check points’, such as copies of any diagnostic reviews, recommended changes, draft outlines and copies of the draft code, over the course of the work to provide the city staff and public (my emphasis) regular opportunities to review the progress and ensure a totally open and transparent project. These materials will be hosted online and made available to the public.”

Under task #1, the contract promises that “Behan Planning and Design, in association with sustainability specialists Brendle Group, will form a Team to prepare and submit a Project Execution Plan, with draft Project Benefits Metrics Report (PBMR), for review and approval by NYSERDA as required by the grant. The draft PBMR shall include proposed performance metrics, projected benefits, and methods for data collection and calculations along with a project schedule and milestones for key project activities.”

The UDO website promises that by the end of November they would publish a “diagnostic review report.” According to the contract this is a review of “the latest Comprehensive Plan, zoning ordinance and subdivision regulations. This review will serve to identify what changes are required to bring the city codes into compliance with the new Comprehensive Plan, synchronize related city policies and standards, and identify other recommended changes which would improve sustainability of the city.”

It is now January 25th, approximately five months into this contract and based on the publically available documents, none of this has been done.   The UDO website had not been updated since December 9th until today when they announced their workshop.

On January 8, I submitted a FOIL request for any documents regarding Behan Associates and the UDO.  I received a response from the City advising me that they would provide these documents within the twenty business days as required by law. I have not yet received these documents. The city has until February 5th to provide them.

I have two questions:

Rewriting our city’s ordinances will have a huge impact on our future. It is hard to understand why, five months into this project the public has had so little information available to understand what, if anything, is going on. 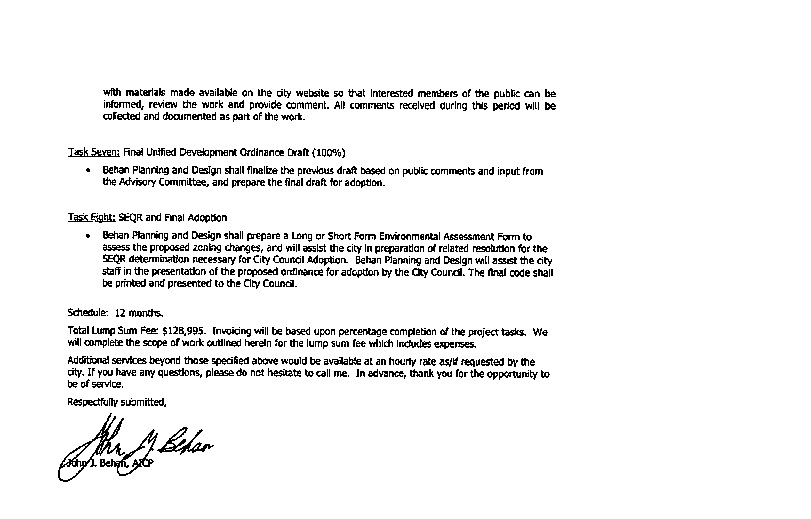 The City of Saratoga Springs will be hosting an all-day community workshop to discuss desired development code changes as part of the city’s Unified Development Ordinance (UDO) project. Local residents, business owners and other interested stakeholder groups are encouraged to sign up for a discussion time-slot. The sessions will be held at Empire State College, 2 Union Avenue in Saratoga Springs from 9 a.m. to 9 p.m on Thursday February 4th.  Interested participants should visit the project website at http://www.saratogaspringsudo.com to find full detailed schedule and instructions on how to sign up for a discussion topic.

The purpose of this community workshop is to collect additional public input and suggestions on potential changes to the city’s Zoning Ordinance, Subdivision Regulations and related development codes prior to the consultant’s completion of a Zoning Diagnostic Report, which is intended to provide the focus for the draft UDO.

City planning staff and Behan Planning and Design will be in attendance faciliate discussions relating to zoning and development regulations. Local residents, property and business owners are invited and encouraged to sign up. All suggestions and comments received from the public will be collected for use in the development of the draft UDO.

This meeting is the second in a series of public events designed to discuss the UDO project. The UDO project will update local development codes and standards to align with the adopted 2015 Comprehensive Plan and introduce initiatives which are aimed to improve the long-term health and sustainability of the city. Additional public meetings will take place as the project evolves to maximize public participation throughout. For more information or to provide input at anytime, please visit: http://www.saratogaspringsudo.com.

The project is part of Governor Andrew M. Cuomo’s Cleaner, Greener Communities program, a major statewide initiative encouraging communities to incorporate sustainability goals and principles into local decision-making, and then form partnerships to transform markets that lead to the reduction of emissions and the generation of economic development benefits. The program, administered by the New York State Energy Research and Development Authority (NYSERDA), also empowers communities to take action, providing technical resources and decision-making tools on land use, housing, transportation, energy, economic development and environmental practices, resulting in a more vibrant and prosperous New York.