During the last several days I have been reading the deposition of Police Chief Greg Veitch as part of the Darryl Mount suit.  Brian Breedlove, the plaintiff’s attorney, grills Chief Veitch in a document both disturbing and revealing. In the documents I include in this post  “Q’s” are along the left-hand side for Breedlove’s question and “A’s” for Veitch’s answers.  There are also entries for John D. Aspland who is the attorney representing the city and Veitch.

In this deposition Veitch  admits that there was only an “ investigation of criminal misconduct allegedly by Mr. Mount”.  There was no other investigation. This contradicts the narrative Veitch presented to the City Council.  It also raises serious questions about Dr. Chris Mathiesen’s statements. 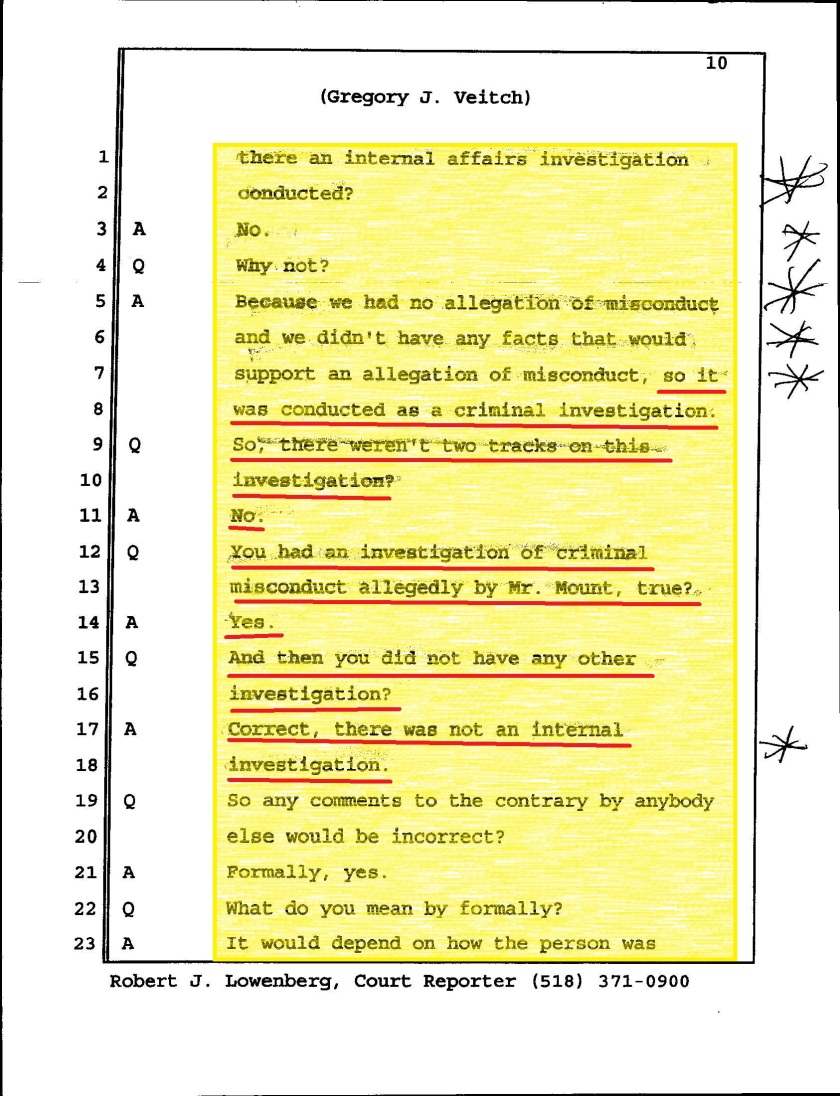 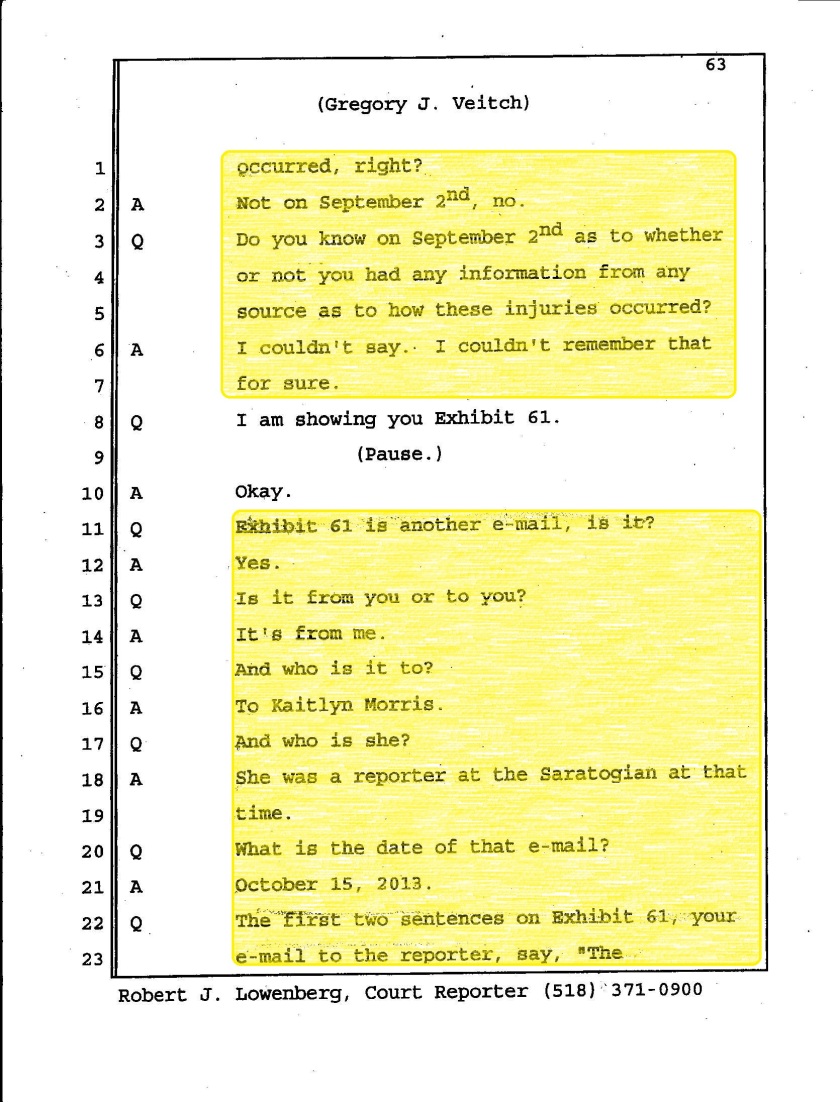 Here Breedlove probes the mishandling of the investigation. 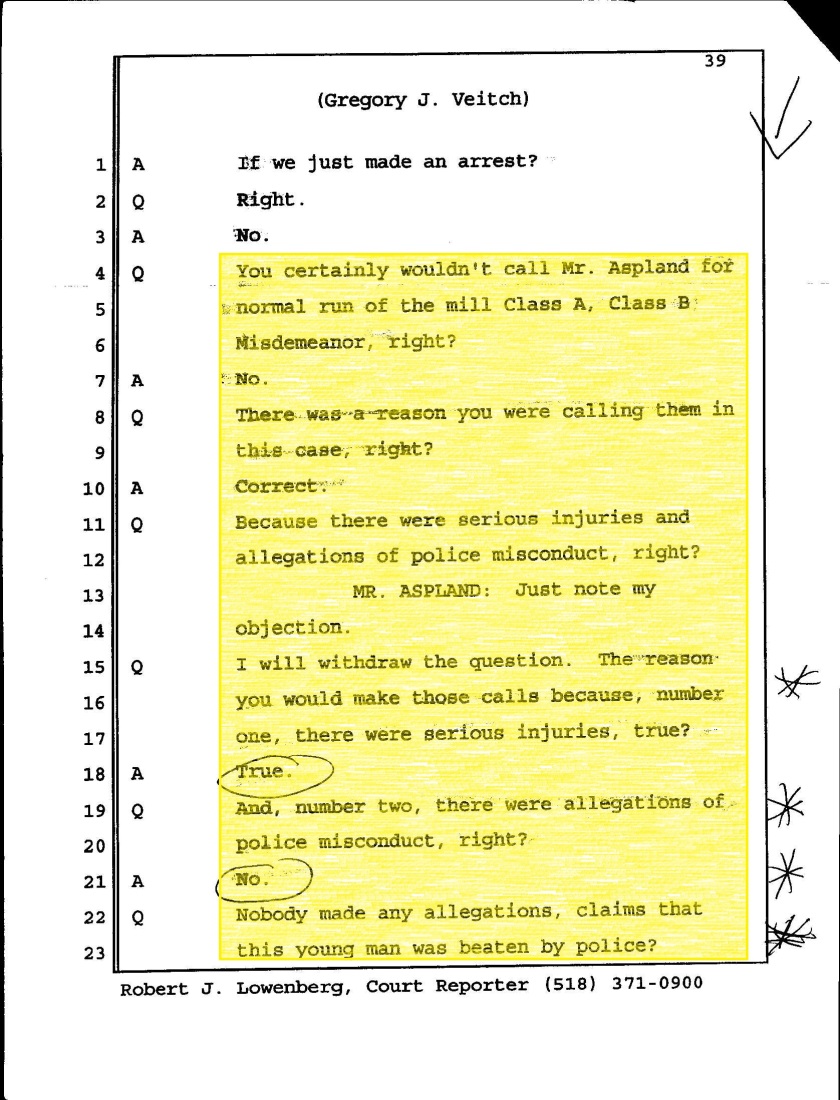 Breedlove questions him about making up his mind that there was no misconduct by his officers without the benefit of an investigation. 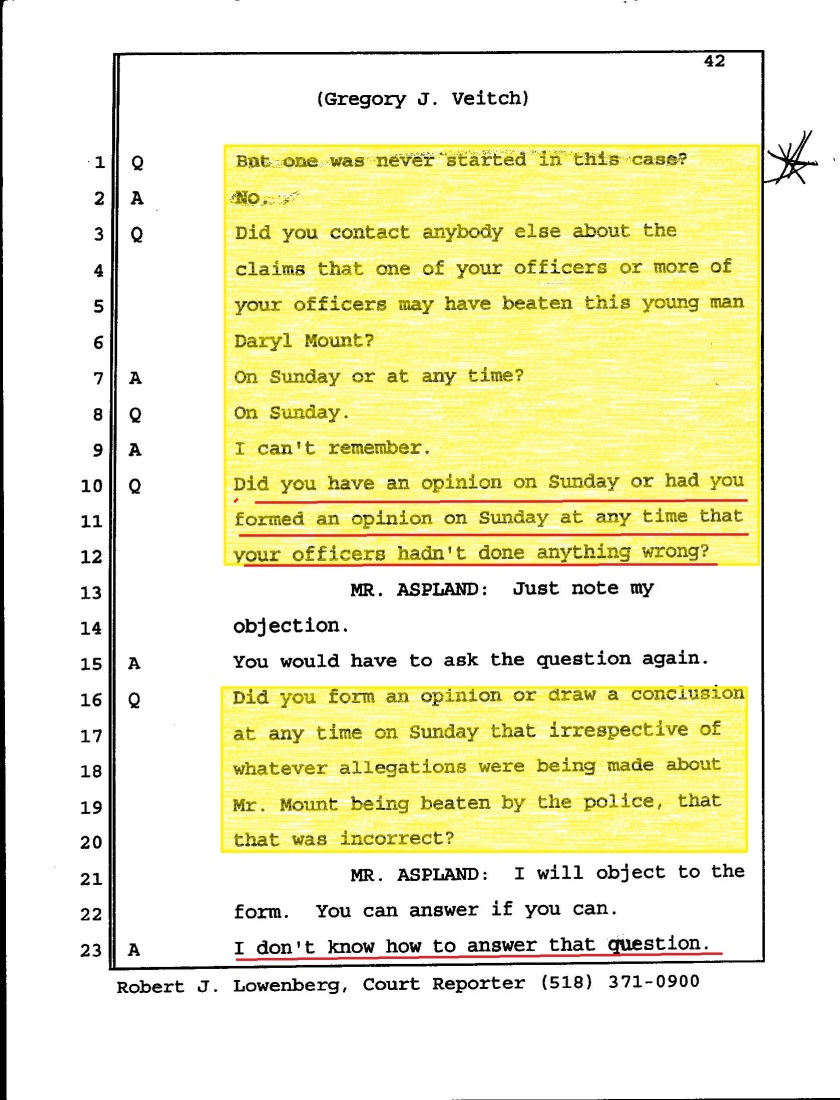 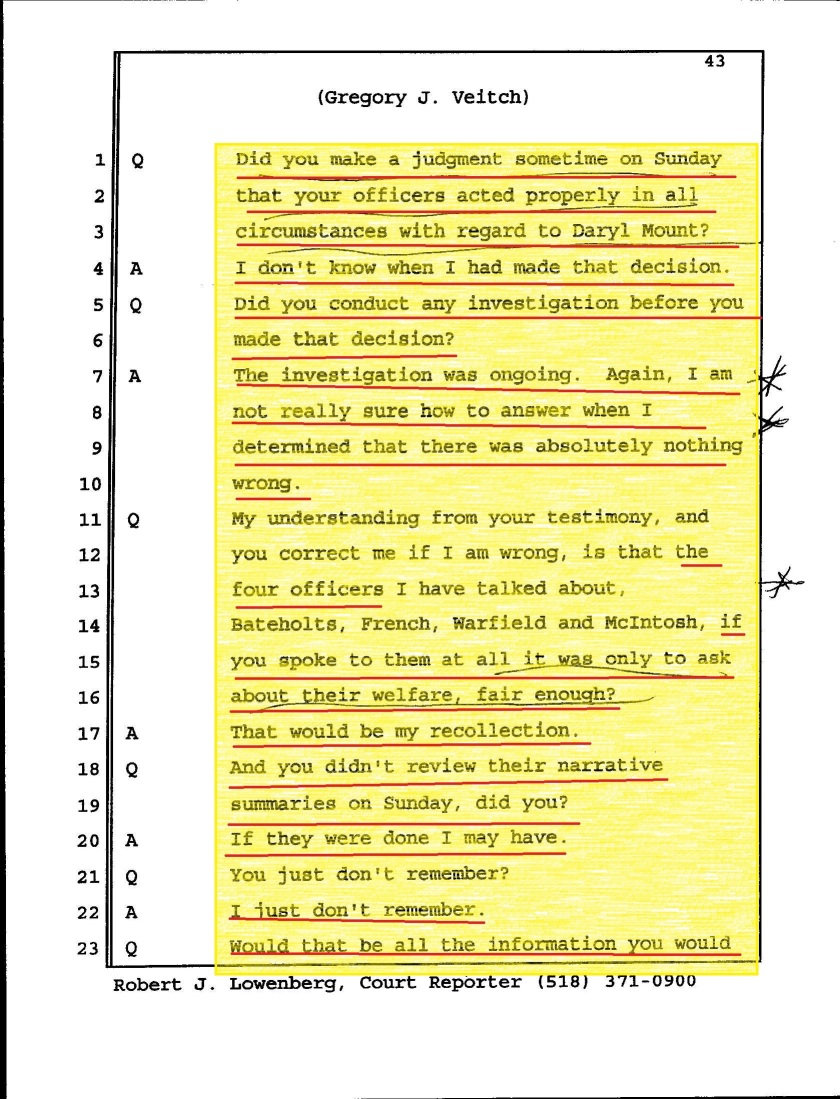 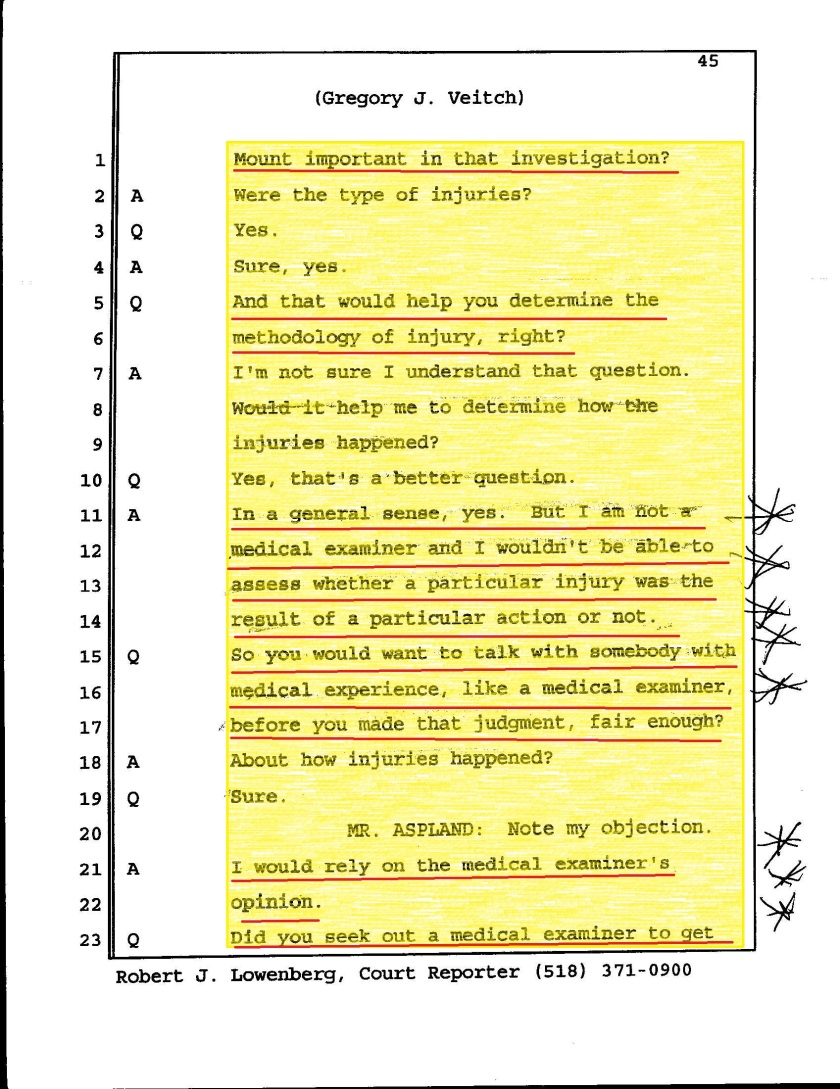 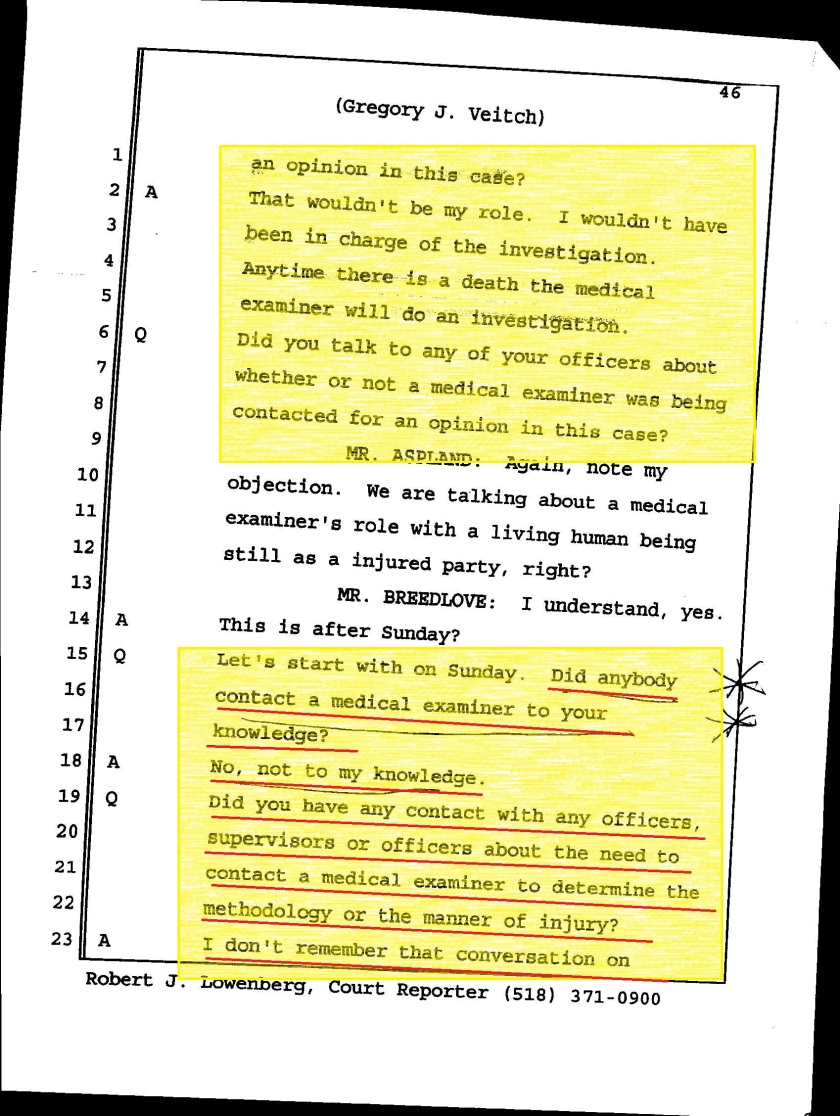 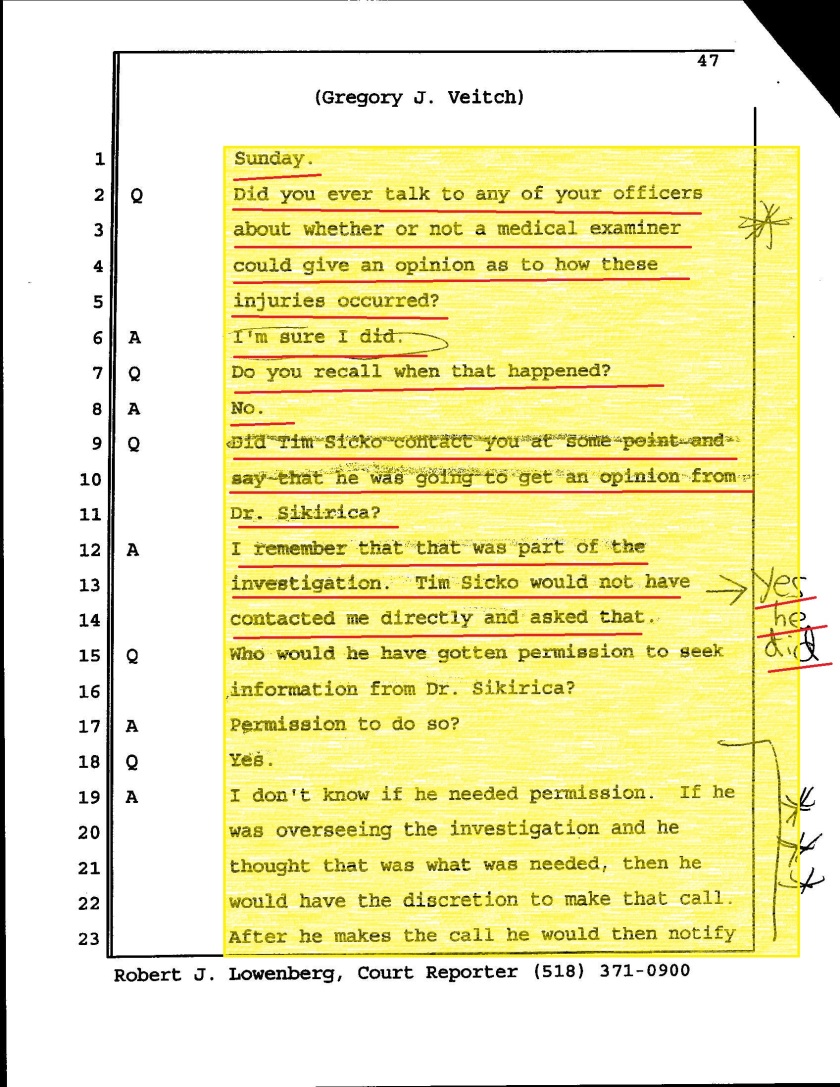 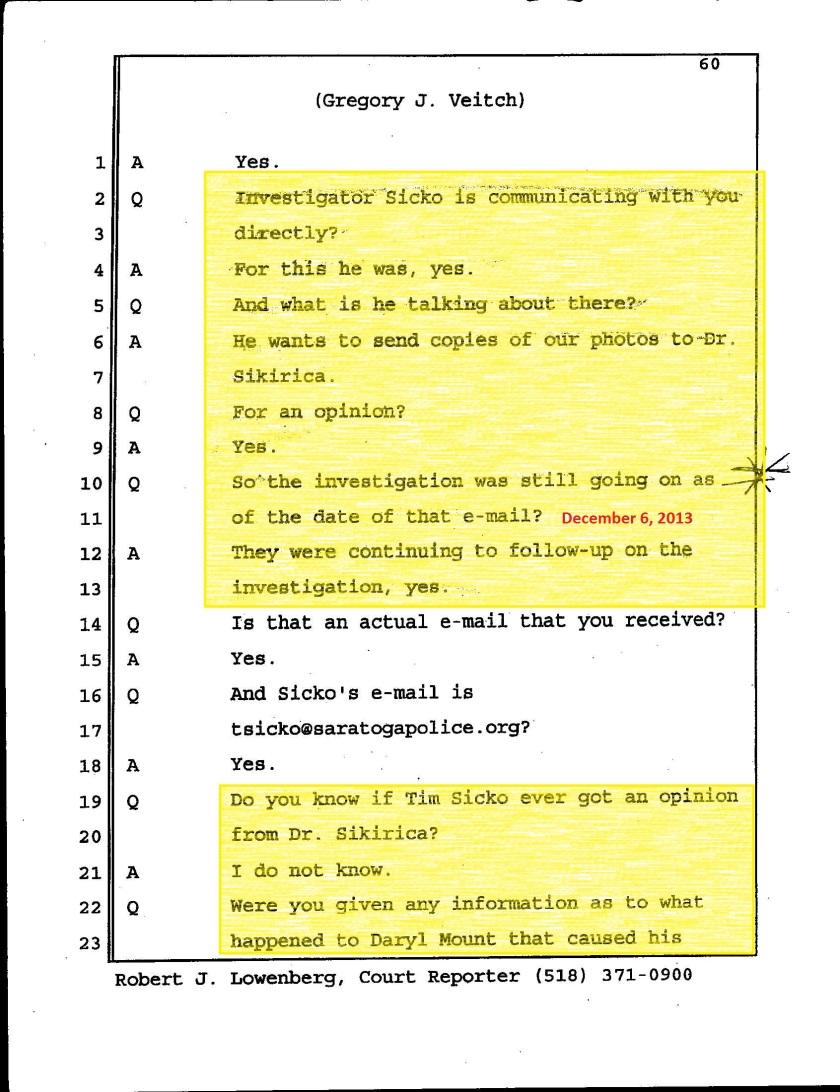 Breedlove question him about any previous racism issues associated with the police involved with the Mount affair.  There is some confusions because documents appear to be missing. 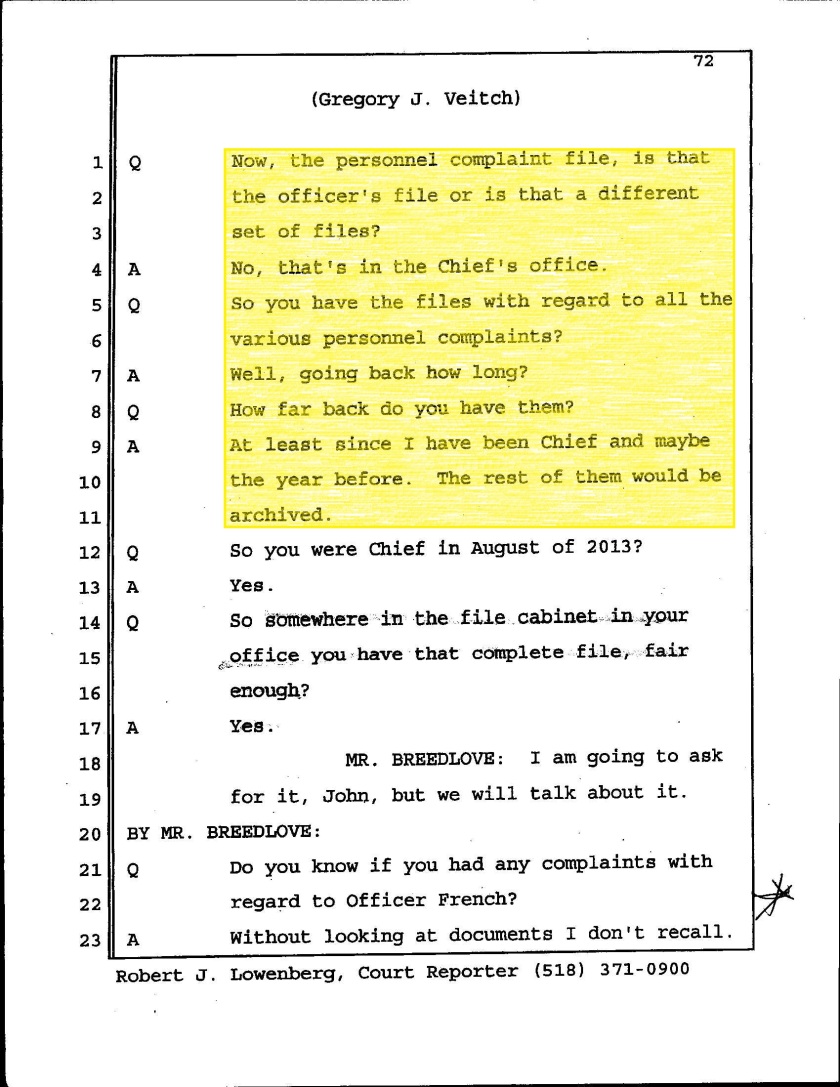 [Note: Dr. Chris Mathiesen has probably dedicated more time to serving this city than any other person I am aware of.  I know him to be a very caring person with a deep sense of public duty.  More than any other politician I have known in all my years here in the city, he has stood up to the powerful in our city in his support of what he considers fairness.   Having said this, I am unable to understand his defense of the investigation of the injury and death of Darryl Mount.]

Barbara Lombardo keeps on with her investigation of the Mount case.

Earlier Ms Lombardo wrote to Chris Mathiesen as a follow up to assertions he made on my website.  He had claimed that the Saratoga County District Attorney [JK:DA] and the Attorney General of the State of New York [JK:AG] had been contacted about “…doing an investigation and apparently decided that the investigation conducted by the SSPD [JK: Saratoga Springs Police Department] was satisfactory.”  I was skeptical about Dr. Mathiesen’s claim but it was Barbara who followed up with him.  She asked him to provide the supporting documentation that the DA and the AG had done a review of his department and had approved his department’s investigation and its conclusions.  She asked:

“Could you please provide any documentation that indicates the D.A. and Attorney General were contacted and decided the SSPD investigation was satisfactory? When did you learn this, and from whom?”

Dr. Mathiesen’s response to her in an email was:

“I was told that both agencies, as well as possibly others, had declined to initiate an investigation and it was inferred that, after looking into it, they found no reason to do so.”

*If indeed, the AG and DA supported Dr. Mathiesen and his department, why should whoever his “source” was need to remain anonymous?

* Who might the other  organizations be that he was told came to the same conclusion?  Why didn’t his source name them?

*Does the fact that Dr. Mathiesen says that “it was inferred [emphasis added] that…they [the DA and AG] found no reason to [initiate an investigation]” mean that he was never explicitly told that this was so?

To Ms. Lombardo’s credit she has sent out FOILs to the city seeking documentation regarding any relevant correspondence between the city of Saratoga Springs and both the DA and the AG.

“Traveler’s Insurance[JK: The company that insures the city] investigated thoroughly and decided that the Mount family allegations are baseless.  Otherwise, they would have settled a long time ago to limit their expenses.”

I have spoken to a friend who is an experienced attorney.  He told me that if the amount being sought by the plaintiff is modest it is not unusual for the insurer to settle because the economics of litigation makes that a logical course.  On the other hand, the insurer has right up until the jury has made a decision to settle the case.  It does not logically follow that because they have not settled that the only reason can be that they think the plaintiff has no case.

Ms. Lombardo asked Dr. Mathiesen for a copy of the insurer’s report to the city and information on who conducted the insurer’s assessment of the case.

Dr. Mathiesen responded that he does not have a copy of the report and then offered:

“I was told that the reason that they were not doing so in this case was because the insurance company found no evidence to undermine the assertion that the police were not at all responsible for the injuries suffered by Darryl Mount.”

This once again raises the question of who the unnamed source is that told Dr. Mathiesen this.

Dr. Mathiesen has expressed frustration that Ms. Lombardo and myself seem unable to grasp his points.  Speaking only for myself, I would be more than happy to accept Dr. Mathiesen’s arguments but I cannot do so without supporting evidence for his assertions.